Who doesn't love a good deal? Never have I witnessed anyone pay more than they need to. But there exists a realm where something priced so low seems unbelievable.

I've bought my share of dirt-cheap products in my lifetime. And I don't blame anyone for trying to save as much money as possible and be frugal when it comes to certain purchasing habits. These dirt cheap products aren't worth it.

When you peel back the superficial packaging, you can see the facade. You're purchasing a cheap product that's masquerading as a luxury item.

Not only are you upset that you wasted your money, but you also feel betrayed by the brand and downright disappointed in yourself for being that gullible. I've learned that there are some products that you can't cheap out on. This includes 90% of the electronic department, and this warning is extra prevalent when referring to printers.

With inkjet printer prices ranging anywhere from $50 to easily upwards of thousands of dollars, cheaper printers do seem like the more enticing option for the average consumer. Admittedly, it's hard to distinguish these low-end printers when they are manufactured by a brand with a pretty reputable name.

But how cheap is too cheap? And what risks do you run by purchasing a cheap printer? We're here to break down the facts and give you some insider secrets about low-cost printers. 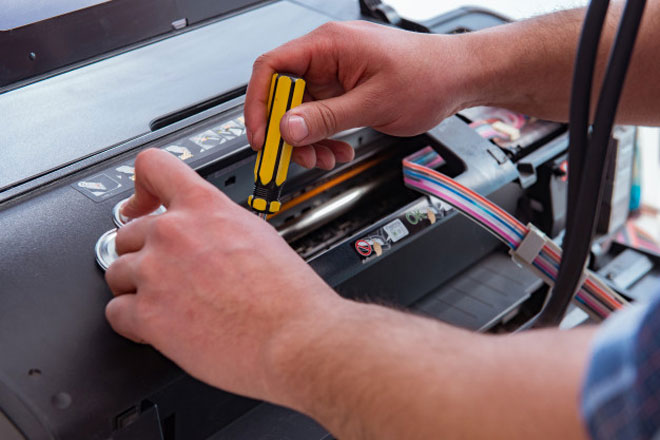 1. A Cheap Printer is Designed to Break

The fact of the matter is, cheap printers are designed to break after a certain period of time. All printers have what's called a Duty Cycle, which is the MAXIMUM number of prints the machine can handle per month. There is also the Recommended Monthly Volume, which is a range of values denoting how many pages should be printed per month.

In tandem, these two meters essentially function as a general output performance gauge.

Cheap printers notoriously have an abysmal Duty Cycle, as they are significantly lower than what you would expect for a moderately priced printer. Well built printers have much higher duty cycles, meaning they can produce more pages per month without repercussions.

After a printer exceeds its Duty Cycle or Recommended Monthly Volume, it is more than likely to break down from general wear and tear. For lack of a better term, every page that is printed puts' stress' on your printer.

Manufacturers intentionally design their printers so you can go over your duty cycle fairly easily.

Let's take a look at this deceptive practice by examining the HP DeskJet 2622. Essentially, it has a Duty Cycle of 1,000 pages. That doesn't seem so bad; it's a pretty high number for those who moderately print. But the Recommended Monthly Value of the HP 2622 is only 50 to 100 pages per month.

Worst case scenario, if you accidentally print 101 pages in a month, you can potentially wreck your entire printer.

The wording and printer jargon is intentionally very vague to throw off consumers and make it seem like the printer is more powerful than it really is. 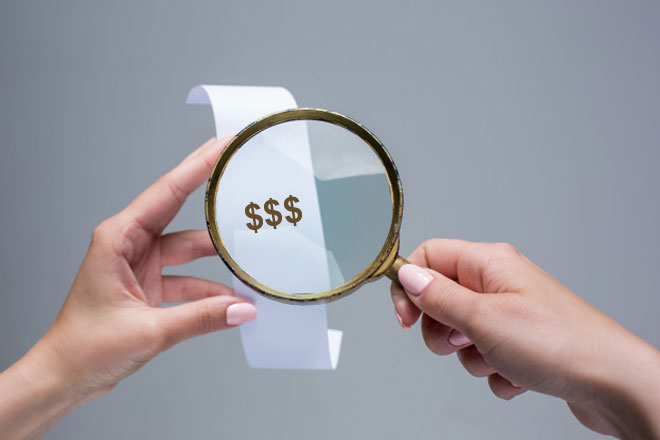 There's a little secret that these printer manufacturers don't want you to know. They make most of their profit from their printer ink sales rather than the printer themselves. So, what about that cheap printer they're selling you? You thought you found the deal of a lifetime, but they are 100% aware of this and already calculated this into their equation.

Printer manufacturers use a sales trick called the "Razor-Razor Blade" business model. They sell you the "razor" for cheap but then hook you with expensive razor blades.

Essentially, they sell you their printer for around the same price it costs to manufacture it. They are making very little profit off of the printer sale. However, after you replenish your ink cartridges even once, they gain a high profit. Ink cartridges are fairly inexpensive to produce, yet they are so highly inflated in price to recoup the manufacturers' losses on the printer sale.

However, there is a way to get around this trick. Instead of purchasing needlessly expensive original ink cartridges, you can try remanufactured or compatible ink cartridges.

We understand that trying a new product from the internet could be risky, but we're not like other brands. soscartouches.ca has been serving customers and industry professionals alike for the past 20-years. If you're not satisfied with our high-quality ink cartridges, we have an automatic 1-Year Warranty in effect on all of our products.

So you want all the functions of a mid-range printer, but you don't want to pay the price? This is the demographic that cheap printer brands thrive on. While they're not allowed to lie or boast features that their printer does not have, they have a way of getting around this.

Many low-priced printers will incorporate fax and copy features but lazily implement them. Some features will be heavily watered down and provide poor copying resolutions, which are so poor, you can't even make out what is being depicted.

These cheap printers often boast these features for the sole purpose of donning the All-In-One, or Multi-Functional title. The problem is, the quality of these features is often so low that it doesn't matter.

Not to mention that these printers will most likely not have any additional features such as Automatic uplex Printing, Bluetooth, Extra Printing Trays, or any sort of quality of life features. Some printers will completely omit to copy, fax, and scan. Be sure to do your diligent research on individual printers before committing to a purchase.

It's ironic because you're expecting a jack-of-all-trades type of printer, yet they do the absolute minimum in regards to most of their features. 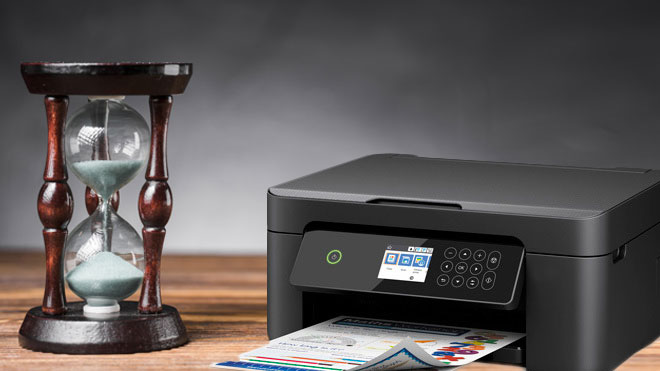 This drawback is one of the silent ones that usually occur to you as soon as you open the box and notice it's too late. While 'slow' is a subjective word, just don't expect these printers to be up to par with moderately priced ones. The so-called affordable printers get left in the dust, with an average of around five color documents being able to be printed per minute.

To put that in perspective, a mid-tier printer can print around ten color pages in that exact same time frame. You're essentially getting half the performance by purchasing a cheap printer.

If you have time on your hands, this should not be a problem for you. Keep in mind that all of this waiting adds up. With ridiculous wait time for color documents, this is not recommended for those printing photos. 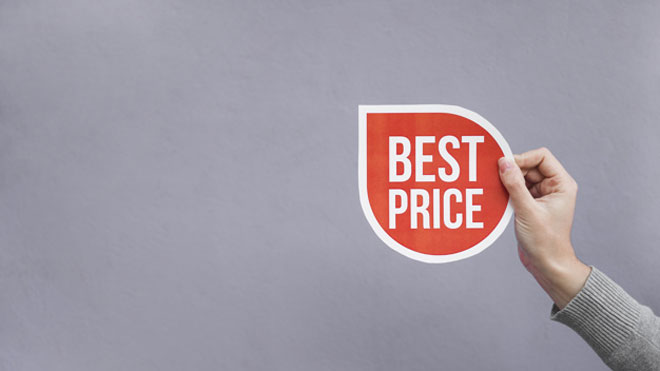 You may not even know these marketing tactics are happening before your very eyes. We're talking about psychological marketing. It's extremely prominent in the printing industry, and it's highly effective towards people who are unaware.

Psychological marketing relies on appealing to consumers' psychological behavior to influence their spending habits. It's a lot less complicated than it sounds. We see so much that we've become numb to it and have been conditioned to ignore it.

One of the biggest psychological marketing tactics in the book? Pricing ending in $.99, these seem so much more appealing than evenly priced products. It's called Odd-Pricing and can be attributed to over 95% of all sales here in the United States.

Consumers on the hunt for a deal are also often affected by the Reference Price Effect, which is a buyer's likelihood to purchase a product if they perceive savings.

Cheap printers, in particular, tend to use this example the most. The printer costs the consumer $49.99, which sounds like a great deal. But knowing that the printer is discounted from its "regular price" of $99.99 sweetens the deal much more. The sense of urgency to buy this cheap printer is at an all-time high. There is a perceived 50% savings from this deal, which is very enticing for a customer in the market. Now, what if we told you that the printer stays at $49.99 for the majority of its life. The deal will no longer seem as special and lessen the urgency to purchase.

Customers are also subject to false expectations when they purchase a heavily discounted printer. You're expecting the reliability of a hundred dollar printer but actually receiving a much lower end-product.

There is an age-old saying that sums up this entire article in six words, 'you get what you pay for.'

While the notion of getting a cheap printer is very enticing, at the end of the day, the odds are stacked against you. You are most likely receiving a subpar product that you're going to pay more for in the long run. With costly ink cartridges and likely repairs to a constantly struggling printer, your wallet isn't going to be too happy with your decision.

Intentionally designed to fail, these low priced printers just aren't worth it for those who have even a moderate print load. In most cases, even purchasing a moderately priced printer will usually have its benefits in the long run.